We can't imagine a summer in Ibiza without David Guetta and his hundreds of thousands of fans coming from all corners of the world to dance to the music of one of Ibiza's most established resident DJs. This 2019 season he returns every Monday to the Ushuaïa Ibiza Beach Hotel with his show BIG by David Guetta, and he will also be at Hï Ibiza on Fridays with F*** Me I'm Famous! and Jack Back.

How is the 2019 season shaping up in Ibiza for David Guetta? The Ibiza resident DJ par excellence reveals some of his secrets and tells us first-hand how he experiences the island every summer. Q- After years in Pacha, you transfer the F*** Me I'm Famous! party from Pacha to Hï Ibiza. What ends and what begins in this new era?

A- I’ve played at Pacha for more than 20 years, so it was a very hard decision for me to make of course. I’ve always had a dream to create a super technology-advanced show and the set-up of Hï Ibiza is perfect for this. For this new era, we’re adding a second room where I will play as Jack Back and show a different side of my music. Idris Elba will also join here as a weekly resident, which I’m super excited about. But of course, we will also keep the vibe of the party that people are used to, and I will also play as David Guetta.

Q- Something new was calling you? What was it?

A- With the release of my latest album 7 I had this full circle moment. I went back to my roots and the essence of why I love making music. I’m at a point in my career where I want to focus on things I’m passionate about and care less about whether it will be successful or not. The residency at Hï Ibiza gives me the opportunity to continue this.

Q- What makes this party unique?

A- We’re combining different genres and artists in one night. And of course, the production and everything around it will be crazy!

Q- How do you prepare this new residence? What will change in F*** Me I'm Famous! at Hï Ibiza?

A- It’s a huge amount of work to prepare for the night. As it’s a new club and a new challenge I’m going through every detail, from remodeling my music completely to the lighting design, the production, the visuals. I honestly think it’s the craziest production that has ever been seen in a club. I’ve been working on the new production with the High Scream team. It’s great to be working with these guys again on the production and I can’t wait for everyone to see it.

Q- Since it opened its doors in 2017, Hï Ibiza has set the tone for Ibiza night ecosystem. What attracts you to the club?

A- The Hï Ibiza team is like family to me and I think they are real professionals. I have a vision for FMIF! for 2020 and they are allowing me to make it happen. I lowered my fee in order to make this an incredible production and to realize my dream.

Q- You are also the Ushuaïa Ibiza’s main dish with your BIG show every Monday. What are you preparing for this year?

A- BIG, Mondays at Ushuaïa are really established now and I think it’s one of the best parties in the world. Everyone has different taste in music but the energy there is undeniable. Playing there just makes me so happy and we share these moments with the clubbers. You might say it sounds cheesy, but it is true, the vibe is really magical.

Q- BIG and Ushuaïa seem made for each other, how have you evolved together?

A- There was definitely a musical evolution last year. People go to my show at Ushuaïa Ibiza because they want to feel good, sing along to my songs and party. They love the energy. Last year I switched it up and started to play a lot of deeper records, and this turned out to also work really well. DJ’ing is also about talking people on a journey and I’m thankful the crowd trusts me enough to let me take them on this journey. Next to that, I think the vibe of the party really matches Ushuaïa and we have managed to only improve this over the years of working together. I’m super happy the party has been successful for such a long time already.

Q- Being such a massive DJ, you still want small sessions like when you started. What do you provide your sessions for small audiences under the name of Jack Back?

A- I did one of my best interviews ever with Beatport which is available to watch now on YouTube. They turned it into a short documentary which is called ‘The road to Jack Back’. It’s about my journey from starting as a bedroom DJ to playing underground parties in Paris and finally getting big crossover success. It’s also about what’s missing in my life, even though it might look like I have everything I could wish for. I love being a DJ, I’ve done it all my life, but DJ’ing on the mainstages of festivals has become more the job of an entertainer and doesn’t leave much space for improvisation. I love being an entertainer, spending time producing my shows and making it perfect, but on the other hand, I also miss what I call real DJ’ing. When you go to a party not knowing what you’re going to play and you feed off the crowd to improvise. Then it’s more about the journey and educating people. And that is what made me go back to playing smaller shows as Jack Back. It’s a different side of me in a smaller, more intimate setting. I wouldn’t want to be only Jack Back because I love my David Guetta shows, but it’s also fun and interesting to do both, especially as a music producer.

Q- In fact, Jack Back will make its Ibiza debut this summer taking over the ‘Club’ (room 2) at Hï Ibiza with weekly resident Idris Elba. How’s this partnership with Idris Elba under Jack Back’s name? How’s having him onboard?

A- I’m very excited to have a residency as Jack Back for the first time. And I love having Idris on board for this. I love Idris as a person, an actor as we all do, but also as a DJ. I think we both have the need to show something different to the world and that’s what is going to make the party so special. We don’t do this for the money or the fame, we already have that. We do it for the love, this is from the heart, out of passion.

Q- What will the fans of David Guetta find in a Jack Back session?

A- Another side of me and my music, basically the music I made when I just started and the music that made me fall in love with producing. And I hope they will love it!

A- Thank you for saying I’m in good shape! You should ask Idris’ secrets, he looks better than me! hahaha! I think there is no big secret, it’s just that if you love yourself, you should not destroy your body with bad food… Next to that, I try to work-out when I can. But I’m not going to lie, it’s hard to keep up with all the traveling.

Q- The party in Ibiza (and in the world) is experiencing a boom in Latin music. You have recorded with J Balvin, authentic Latin music symbol on your new album ‘7’. In some interviews, you told that you took a long time to make the decision and that you could have collaborated with him much earlier. What led you finally to latinize your music?

A- Even if I don’t play Latin music as a DJ, as a producer I always observe the different directions in which global music is heading. I recorded a track with J Balvin before the huge Latin trend, but I was doubting myself a lot at that moment. When people around me said ‘’What? Latin music? Are you crazy?’ I got scared and decided not to release it. But it’s okay, I’ve learned from it. I’m currently working with amazing Latin artists and it’s really, really exciting.

Q- This global romance with Latin music, is here to stay?

A- I think if you look at musical phenomenons, the biggest one lately has been Latin music taking over the world. But I think it is not yet where it could be. Hip-hop is everywhere to a point that it’s the new pop and could start to saturate. Dance music is still huge but more underground, and Latin music has still a lot to develop. It makes the girls feel sexy and that brings in the boys!

David Guetta continues to establish himself as one of the resident DJs in Ibiza who returns to the island every year with more news, more music and, above all, more desire to make us dance. The doors of Ushuaïa Ibiza and Hï Ibiza keep opening for him, and the most loyal clubbers continue to confirm that his sound is one of the most vibrant of the past, the present and, why not, the future. 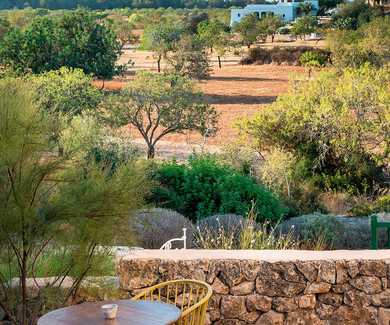 Ibiza Tips: cafés and beach bars where you can recharge your batteries.