Showcasing David Guetta’s many different facets, his new album displays his pop side, along with his empathy and symbiotic relationship with other big stars, all without forgetting his underground roots.

What secret does number 7 hide? To Pythagoras, this was the perfect number, Alighieri used it repeatedly in his work and the Bible also mentions it frequently. Seven days of the week, seven world wonders, seven deadly sins and the name of David Guetta’s new album. A name that was surely not chosen by chance, its meaning goes way beyond being his seventh studio album because with this great piece of work, the French DJ and producer hopes to begin a new era.

“7” is David Guetta’s new album and it boldly shows the different facets of the DJ; none are obvious and for this reason they have been presented on two disks. The first one develops his pop side, along with his symbiotic abilities and his empathy towards other big stars, creating unforgettable collaborations that go directly to the top of the radio charts and the online music channels.

The second disk is a return to his roots, to his underground past, his alter-ego Jack Back. A disk in which he signed to create an exclusively electronic work made of 12 songs especially designed for clubs, songs that we could listen to this summer at BIG, David Guetta’s party in Ushuaïa Ibiza Beach Hotel.

And as if all this wasn’t already enough, “7” has gone on sale as a limited deluxe edition with four bonus tracks that will become the number one songs of all the DJ’s unconditional fans. Some of the new album’s unarguably best hits are “Mad Love” with Sean Paul & Becky G, “Dirty Sexy Money” with Afrojack, “So Far Away” with Martin Garrix and “Your Love” with Showtek.

Strangely enough, Justin Bieber had never appeared on the endless list of pop stars that had worked with David Guetta. However, it was well worth the wait. The two artists united in the studio to create “2U,” an infectiously catchy powerhouse hit with a clear Future Bass influence.

Justin has a unique voice and I really respect his talent, as well as his choices. Lately, he’s taken some risks in order to reinvent himself in a creative, surprising and incredible way and I’m very proud to finally share a song with him,” claims the French DJ.

Two of the greatest icons of Ushuaïa Ibiza Beach Hotel, David Guetta and Martin Garrix, meet again to create another electronic anthem: “Like I Do.” The chemistry between the French and Dutch DJs is clear in this song, which combines the best of each of them with the powerful vocals of Brooks.

In Martin Garrix’s own words, “David is a legend. I have a lot of respect for him as an artist and I’m very happy to be able to release another song with him, along with the incredible Brooks, with whom I’ve worked on other albums before. I think he is one of the most talented producers out there.”

Are you looking for a bold, fun and unconventional song? Then, look out for “Goodbye,” one of the most brilliant tracks produced by David Guetta, Jason Derulo, Nicki Minaj and Willy William. An addictive song that plays with bilingualism in its verses and will surely become a success this autumn.

Among the most acclaimed collaborations of David Guetta’s career, his megahit “Titanium” with British singer Sia stands out as one of those songs where the artists were transcended and dance floors all over the world were overflowed. For the album “7,” the duo gets back together one more time thanks to “Flames,” but in this case it is a track with a more soothing rhythm, bringing back the sounds of 80’s electropop.

It’s not a coincidence that Guetta’s sense of detecting rising stars is one of his most notable qualities. This time, he recruited the new British pop sensation, Anne-Marie. “Don’t Leave Me Alone” is the fruit of this collaboration, in which he marinates to perfection a fun and fresh pop combined with the refined elements of R&B.

It was only a matter of time until these two electronic giants would join forces, Black Coffee displayed his interest in working with David Guetta and the French DJ opened up his Los Angeles recording studio without hesitation to create a true jewel. In only one day they developed “Drive,” designing a sound in which the essence of both artists is perfectly recognizable, even though each one pertains to a completely different style.

“Para que te quedes” is the French DJ’s most Latin collaboration, which he produced with J Balvin. A job that began years ago, it was finally completed this summer in a studio in Ibiza. With this song, Guetta steps into a new production line that opens up his doors to the Latin American market, with a rhythm directed towards urban music that will be a hit among his younger fans.

Ultimately, David Guetta’s new album, “7”, brings together the seven best sides of the French DJ. Choose your favorite or choose them all. And allow yourself to be amazed one more time by the most critically acclaimed DJ of the world. 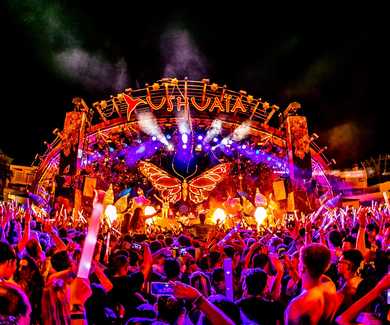