The time has come to bid farewell to the summer season and the 2019 Closing Parties at the Ushuaïa Ibiza Beach Hotel are getting ever so closer. Time to get ready for an intense farewell roster of events that will keep us warm until next year. Start your engines and see you on the dancefloor!

With the end of the season approaching, it´s safe to say that this summer has been electrifying for the Ushuaïa Ibiza Beach Hotel, with the many amazing moments it has been a witness to, and all of the great music it harbored this year. It´s time to revisit the golden moments of this summer season and remember why music will always reign supreme in Ushuaïa Ibiza.

The Greatness of ANTS and elrow

If there are two names that have impressed revelers this summer in Ushuaïa Ibiza Beach Hotel, those were ANTS METROPOLIS and elrow. They are spectacular, baroque, full of colour and surprises and with a striking decoration and an Olympic Games staging level. In addition to this huge media deployment, music has also been a major protagonist at both parties. The best underground DJs of electronic music have passed through the booth of both parties, leaving a clear message on their current status. There has been smiles, uncontrolled joy and an avalanche of emotions that flooded the dance floor of Ushuaïa Ibiza Beach Hotel thanks to ANTS METROPOLIS and elrow.

If you want to attend the last ANTS METROPOLIS events of the season you can get your ticket here. 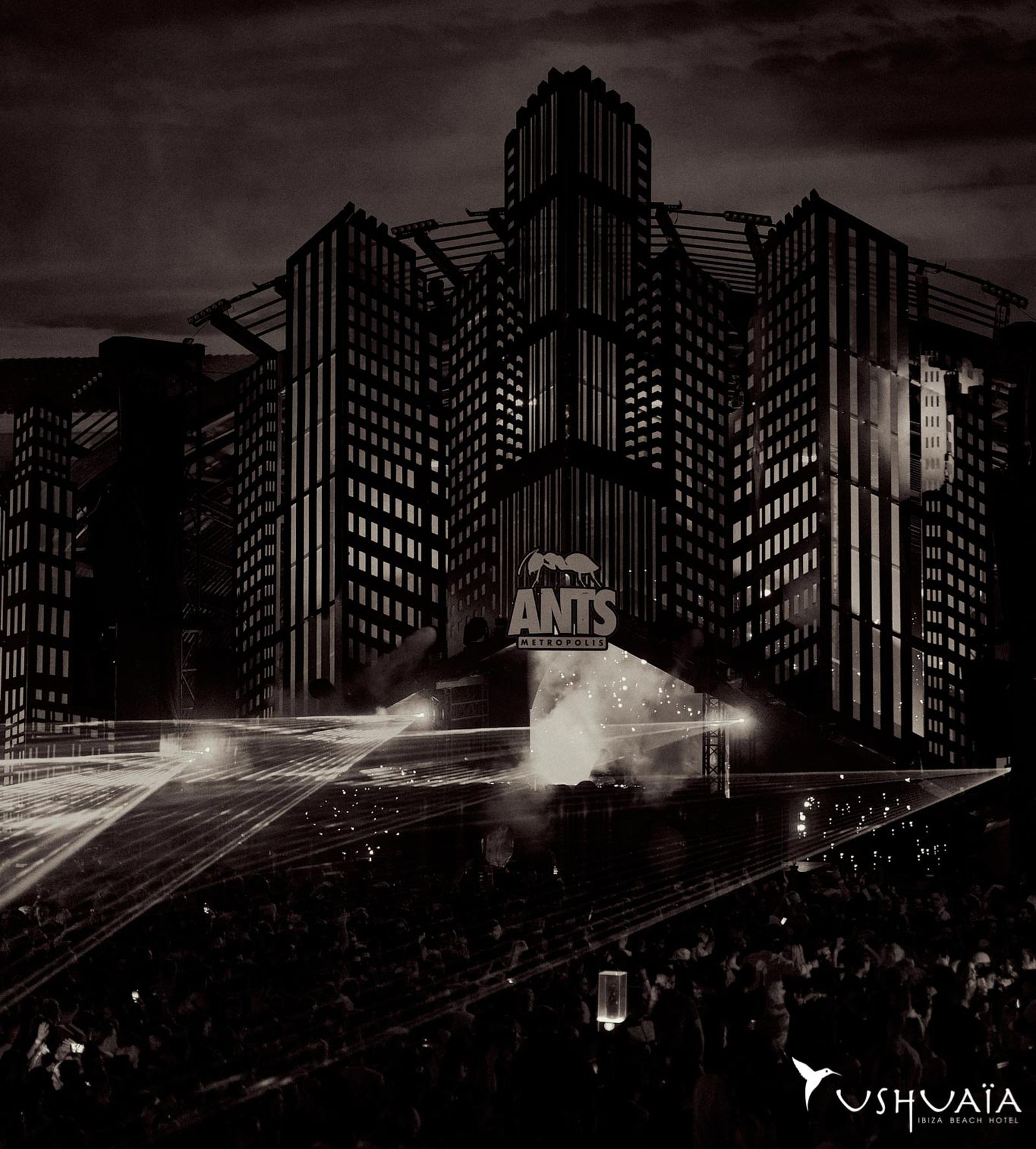 The impressive staging and decoration of ANTS METROPOLIS.

The most important anniversary of 2019 has undoubtedly been the 20th anniversary of Cocoon Ibiza. A very special celebration that brought together two of the best performances of the summer with Underworld and Kraftwerk, and whose setting, of course, was the Ushuaia Ibiza Beach Hotel. The 25th of May marked the start of this anniversary with a magical performance by one of the most important electronic music duos in history. Attendees were able to experience an intense performance where there was no shortage of classics such as Born Slippy and the most recent songs by the artists. An unbeatable way to start the summer.

And as the culmination of this extraordinary collaboration, Cocoon Ibiza held an event on September 13 that will go down in the history books of electronic music on the island, an immense fortune to be able to enjoy the parents of this musical style: Kraftwerk. Rain or shine, the show did not disappoint, those attending the concert were able to taste every second of a memorable spectacle. 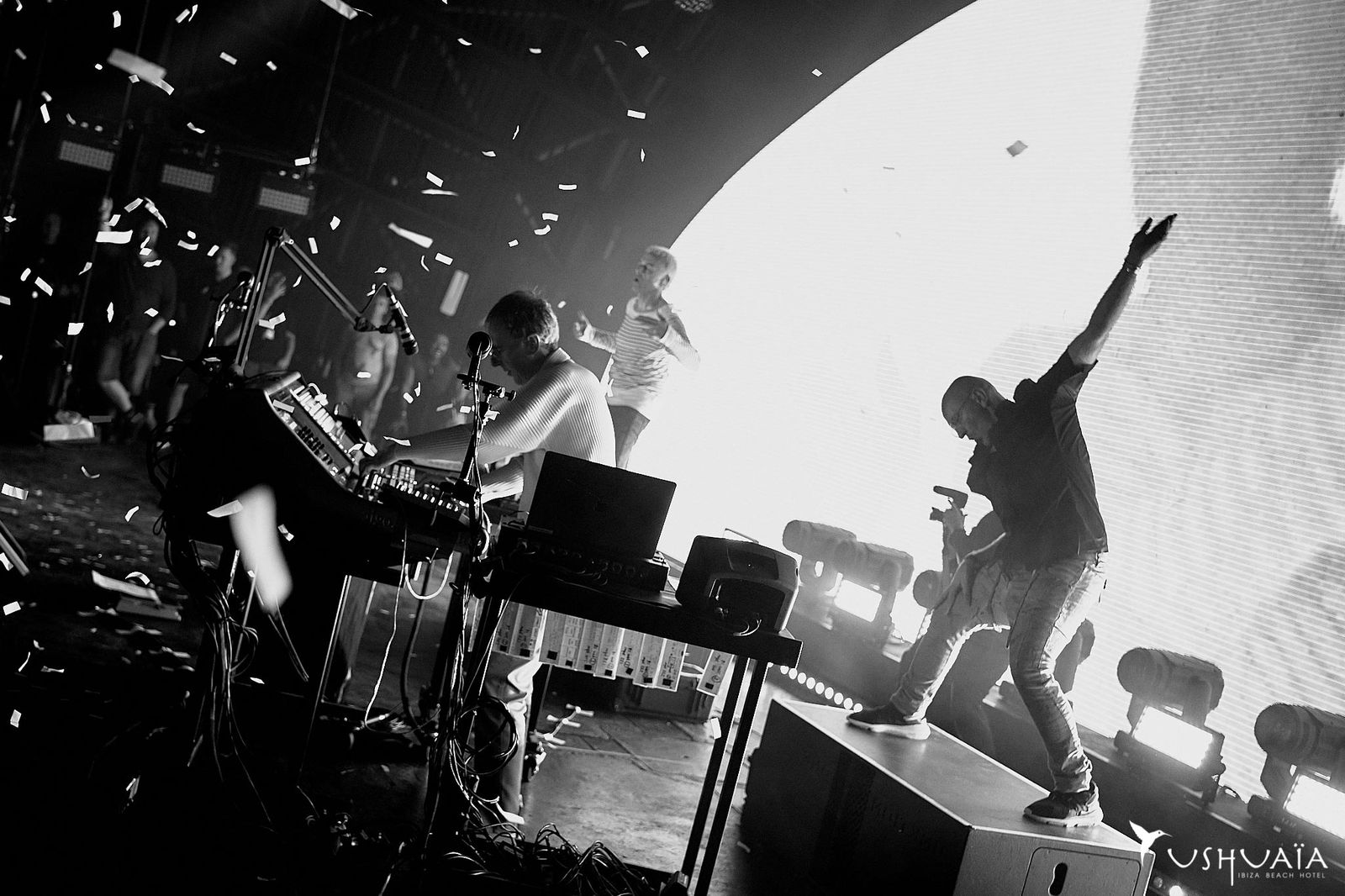 Underworld and the unforgettable concert in Ushuaïa Ibiza Beach Hotel.

The return of Swedish House Mafia

Nothing motivates a lover of EDM more than the return of his idols after a long absence. Therefore, no one is surprised that the performance of Swedish House Mafia generates so much excitement and such high expectations, which of course was more than fulfilled, getting a sold-out sign at Ushuaia Ibiza Beach Hotel, nobody took the chance of missing such an important event.

The tension was palpable in the atmosphere in the minutes prior to their appearance, people were eager to listen to their electronic music gurus on the island that united them and elevated them as some of the best DJs in the world. Swedish House Mafia was perfectly aware of the responsibility that came with that performance, and so from the first second, they showed that their intention was to prove why the group deserved their accolades. The dedicated audience helped to create a magical atmosphere, merging with the energy of the event in Ushuaïa Ibiza Beach Hotel.

One of those events that you wish would never end and that will take time to happen again. Although speaking of Ushuaïa Ibiza Beach Hotel and Swedish House Mafia who knows, anything is possible. 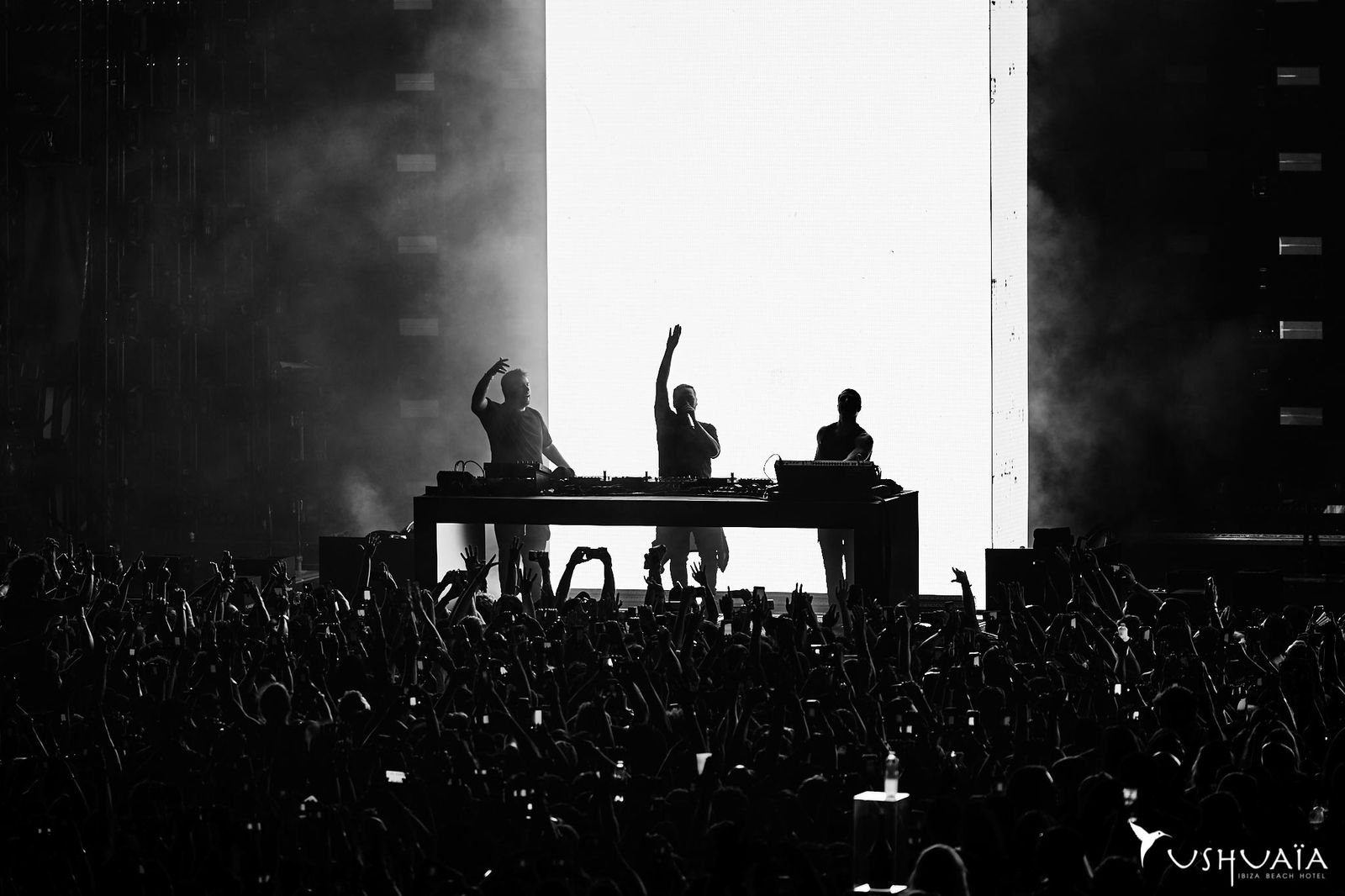 The exciting return of Swedish House Mafia to Ushuaïa Ibiza Beach Hotel on the 26th of July 2019.

Carl Cox, The Godfather of DANCE OR DIE

Ibiza is the island where DJs become legends, and one of the greatest legends is undoubtedly Carl Cox. A benchmark of Ibiza's Clubbing culture, he has recently chosen his performances very well, selecting a few events each season. That's why having him at Dance or Die in Usuhaïa Ibiza Beach Hotel is a luxury within the reach of very few.

Dance or Die has been one of the great surprises of this summer, the quality of their set has been undeniable, with the presence of DJs of the caliber of Loco Dice, Pan-Pot, Dubfire, Paco Osuna, Nastia and CamelPhat among many others.

The bang it created in its Opening Party still rings in our ears, the joy, and fun Dance or Die promised with its first event, was delivered throughout the whole summer. An Opening Party, in which King Carl Cox proved yet again, why he deserves his crown.

If you couldn't experience this event, you will have one last chance on September 25th, 2019, at the Closing event led by Nic Fanciulli at Ushuaïa Ibiza Beach Hotel.

The great Carl Cox at the Dance or Die Opening Party on June 19th.

The Reign of David Guetta and Martin Garrix

The clubbing scene in Ibiza is usually an opportune territory for all kinds of troublesome surprises. But with DJs like David Guetta and Martin Garrix, there's no room for it, as overwhelming success is repeated year after year in their residencies at the Ushuaïa Ibiza Beach Hotel.

David Guetta with his BIG event has turned Mondays into the best possible start for the week, with a vibrant and colorful staging, and best of all, accompanied by first-rate EDM friends; Alesso, Brooks, Disciples, Jax Jones, Lost Frequencies, and The Chainsmokers. There is no reason in not attending Guetta´s last event of the season!

Martin Garrix, for his part, has once again given a recital on Clubbing energy and overflowing talent. Each of his nine dates have been unforgettable, full of illustrious electronic moments that have exceeded the expectations of his fans. A perfect example was his Closing Party, in which the Ushuaïa Ibiza Beach Hotel was overwhelmed with the sound of this young star whose brightness is never extinguished. 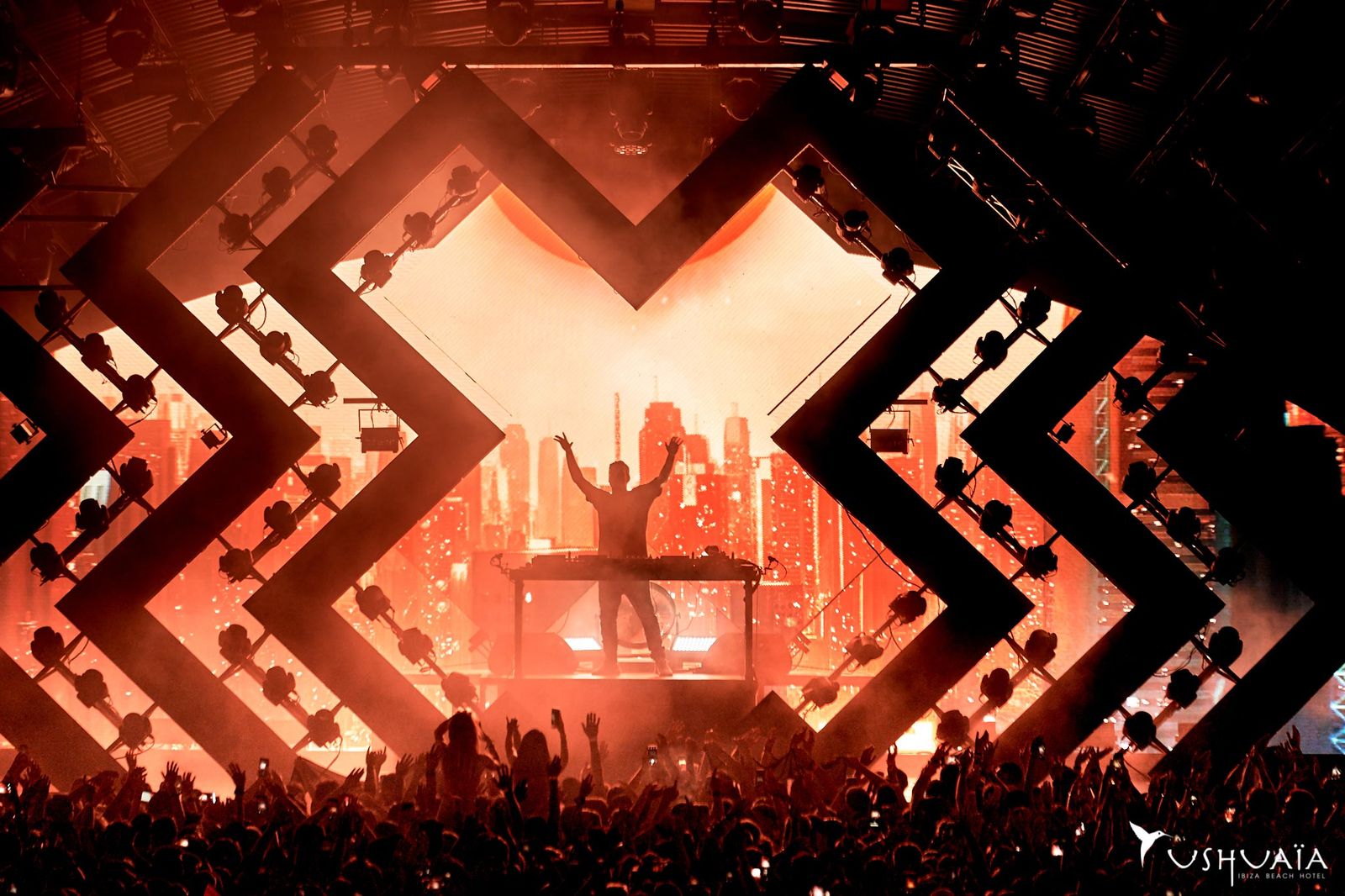 Martin Garrix proved once again, on August 29th, why he is considered the best DJ in the world.

In short, an impressive season that has not yet put an end to its programming in Ushuaïa Ibiza Beach Hotel, and that faces the final stretch of the summer with a lot of surprises and exceptional musical moments that you cannot miss.